The hot air balloon was invented by the Montgolfier brothers, Joseph-Michel and Jacques-Étienne, in 1782. The first flight of the brothers in hot air balloon was experienced the June 4th, 1783 on the Place des Cordeliers in Annonay. In the same year, the very first passengers of a hot air balloon were a duck, a rooster and a sheep taking off from Versailles, in front of the King Louis XVI and his court. The three animals have made a climb up to 480 meters.
Following this success , the first tethered flight (balloon attached to the ground by ropes) is realized at the Folie Titon, (nowadays located rue de Montreuil in Paris), the October 19th, 1783, by Jean-Baptiste Réveillon, Jean-François Pilâtre de Rozier and Giroud de Villette. 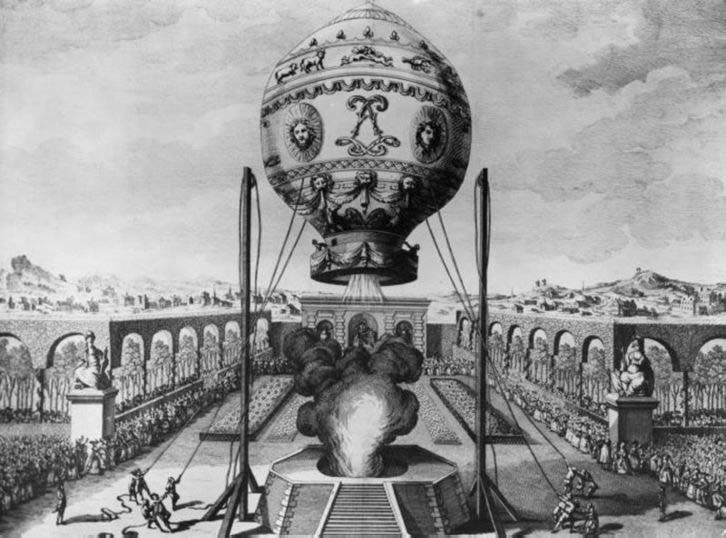 Following the success of this captive flight, Jean-François Pilâtre de Rozier and the Marquis d’Arlandes made a second flight, November 21st, 1783, which was officially commemorated more as the first flight.
The first lady to fly was Élisabeth Thible, the June 4th, 1784 in Lyon.
The principle of functioning stays a mystery. The mystery begins to dissipate in mid-June 1784 by the Mrs. Morveau’s letter appeared in the Journal de Paris on June 13th, 1784.
Hot-air balloons were quickly evicted by the gas balloons; the 1st flight was in December 1st, 1783 with in its control the inventor, the physicist Charles and the 2 brothers Robert. Because hot-air balloons were difficult to inflate and it was not rare that balloons take fires lights during the inflations these realized with of big straw fires. Hot-air balloons were warmed on their maximum on the ground then released, which could not thus make a flight only of about ten minutes.
The end of the 50s signs the big return of the hot-air balloon with the use of a synthetic fiber (the nylon) for the manufacturing of the envelope and the liquefied petroleum gas, the propane to warm the hot-air balloon. These first allowing hot-air balloons a more flexible and reassuring use custom were realized in the United States then in France in 1972.