Hot-air balloons work according on one hand to the principle of Archimède and, on the other hand, the characteristic of gases according to which the product of the pressure of the gas by its volume is always proportional in its temperature.

The push of Archimède is the strength received from a body plunged into a gas equal in the weight of the uncalled-for volume of this gas.

Under the effect of the heat, the air dilates. Its density decreases: thus, in constant pressure, the hot air takes more place for the same weight, or weigh less heavy for the same volume as the cold air. To summarize the hot air is thus lighter than air cold. The temperature inside the balloon is regulated thanks to the burner and to the valve what allows to rise or to go down.

The aerostat is remarkably simple in its conception and handling. It consists of three main parts: envelope, fuel system (burner with load frame and fuel cylinders) and finally a basket of woven construction or seat to carry the pilot and passengers. 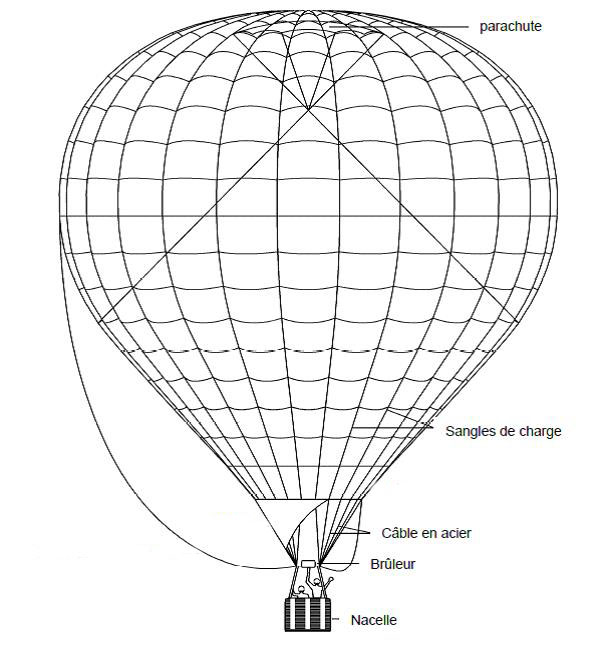 The envelope is composed of a certain number of gores. It is made of high resistance polyamide fabric, reinforced by several polyester load tapes. These load tapes bear forces due to loading, and transmit them via stainless steel cables to the load frame. The lowest part of the envelope is made of heat resistant Nomex.

In the top of the envelope is a large hole, where there is no fabric but the mesh of load tapes continues. This hole is covered, from the inside of the balloon by a loose panel of fabric, centred by a system of cords, which makes it resemble a parachute. It is kept closed by the internal pressure of the balloon, so that it seals tightly against the opening and the mesh of load tapes. It is opened from the basket by pulling a cord, a process that is completely reversible, as when the rope is released the parachute reseals.

The size of the envelope depends of the support load asked.

The burner is a device for converting the fuel (liquid propane) stored in the fuel cylinders into heat energy. This energy is used to heat the air inside the balloon envelope and thus provide the means of inflation and altitude control during flight.

Fuel is supplied to the burner through the flexible hoses. The fuel enters a machined valve block via a fuel inlet post. The fuel is then distributed to the various valves and pressure gauge in readiness for use. Fuel flow is controlled by an on/off valve called the blast or main valve.

The burner is available in single, double, triple and quad variants.

A minimum of two blast valves and two fuel supplies are always fitted. With a double, triple or quad burner each coil has its own blast valve and fuel supply, while in a single burner both fuel supplies connect to the same burner coil but via separate blast valves.

The main or blast valve allows fuel to pass through the coil to be pre-heated and then burns at the jet or diffuser outlet. This part of the burner gives the maximum power. This valve has a squeeze action. The burner is the part of a hot-air balloon which undergoes most technological improvement always with the aim of having a ratio consumption power the most efficient. 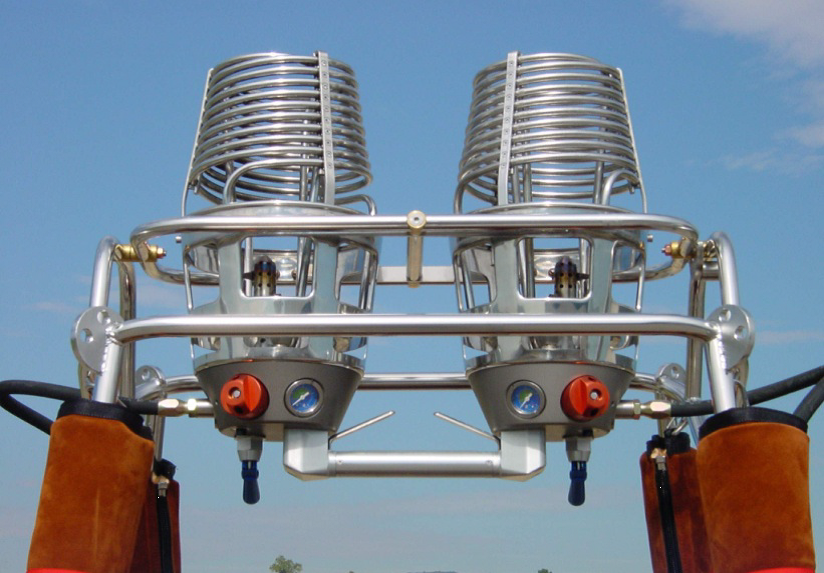 This is a stainless steel frame that establishes the link between the envelope, the burner and the basket. The burner is mounted in the centre of the frame by being swivel mounted on a gimbal. The frame is supported on nylon rods, which are fitted into sockets, which are welded to each of the corners of the load frame. The basket and envelope are attached via the load wires to the corners of the frame with karabiners linked to lugs. These lugs are welded to the frame.

The basket is made from woven willow and cane some other materials were used, but we always returned to these natural materials, which offer flexibility and keep an unconditional charm.

The basket is connected to the load frame by a minimum of four stainless steel cables that pass down the sides and through and under the base. These cables are continuous in pairs. Tube stiffening and tube sockets are woven in various positions depending on the size and type of basket. The sockets are to accept the nylon rods, which support the burner load frame. These support rods, cables as well as burner hoses are kept inside padded zipped covers when erected. 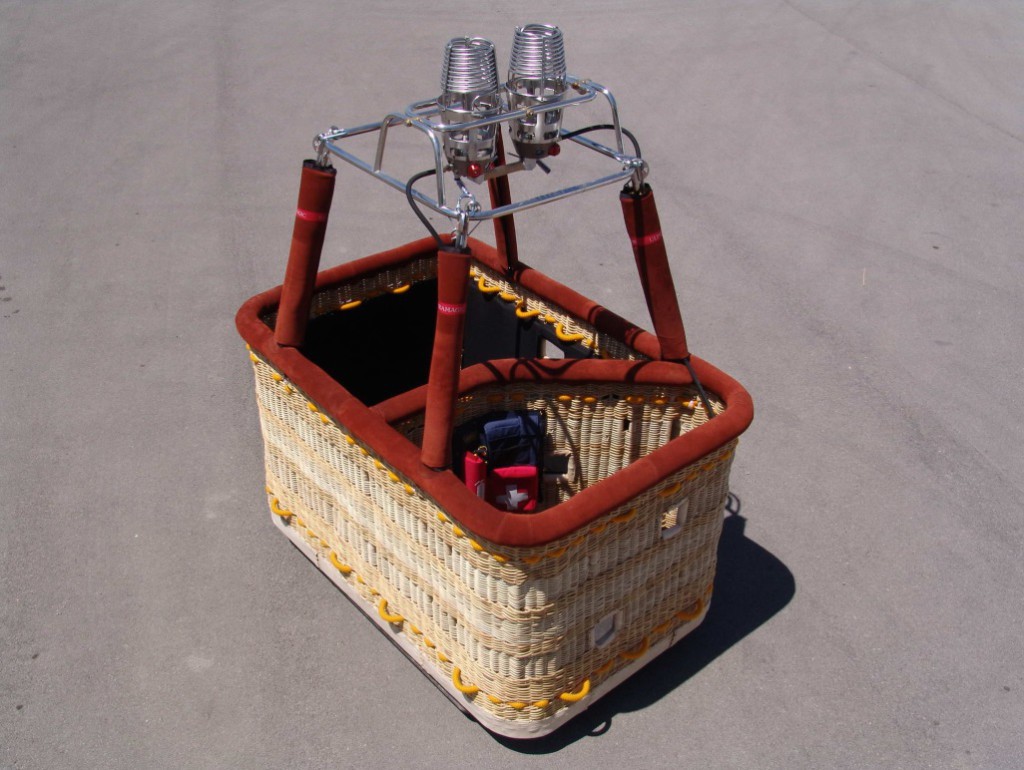 The top edge of the basket is padded with foam and covered in either leather or suede both to enhance appearance and also to offer passenger protection. The basket as the envelope varies according to the passengers’ number. When the passenger number is upper to 5 people, baskets are divided.